It’s been quite a while since we sponsored little Jeferson Ernesto Suchi Aguilar.  The boys have been asking me over and over if we could send him food, clothes, and other things.  Compassion doesn’t allow us to send goods, but asks instead that we send cards, letters, and other things like that to let him know how much we love him.  Of course, we can make monetary donations at any time to help him with those things the boys wanted to send. 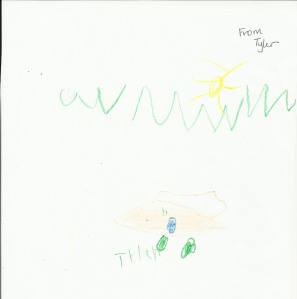 over it!  Cole knew he liked cars, so he made him a card with such a sweet “I Love You” message on the outside and some little cars on the outside.  Madi scribbled some beautiful art, and Tyler drew him the sun shining on some flowers.  I taped a photo of us inside a card with a message.  I told the kids that the best we could do for Jeferson was to pray for him…and they smiled at that.