Well, we missed about two months.  To say a lot has changed is putting it mildly.  Two months ago, we lost our fourth baby at 38 weeks.  Chase is a beautiful angel and rest in the arms of Jesus.  For that, we are so happy.  But we miss him, and we’ve spent the past couple of months making sense of everything and finding our new “normal”.  The kids stopped asking about service projects, and I stopped feeling the motivation to serve.  But several weeks ago I heard about the death of a young man who went to meet Jesus at the age of 21.  And suddenly I wanted to serve everyone.  I wanted to calm the fears of anyone who was scared, feed anyone who was hungry, love on anyone who felt alone…I once again felt the call of Jesus.  And it suddenly became even more important to me that I instill certain values in my children.  No matter how many medals they win, how many A’s they make on tests, or how many trophies line their walls, if they seek first the Kingdom of God, I have done my job.  And to me, a large part of His kingdom is serving others.

So we started with something small – a donation to Goodwill of yet more stuff that we did not need.  We have far too much stuff (don’t we all).  And if we’re not using it, we should give it to someone who can.  Here are the boys dropping off the “stuff”.

The boys were really excited when I told them we were going to do a service project – until I told them I had to take a photo of it.  But they got back into the groove, and I explained what “goodwill” was.  It was a nice welcome back into our mission, and it is my prayer that these projects instill in my children a love for serving others as if serving the Lord himself.

I admit, having three kids, working full time, and entering the last couple of months of pregnancy has made me one tired momma.  But our church has made it a priority to start giving back more to our community, and I am going to take advantage of those opportunities!   In January, the church held a clothing drive for a local group called Society of Samaritans.  What a GREAT opportunity to clean out the closets.  So the boys went through their old clothes, and so did my husband and I.  The boys were excited to give the clothes to the people who needed them.  Here they are picking out clothes to donate… 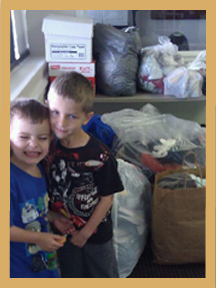 This was actually last week’s project.  Time constraints have made me slow to post it,  but when Cole asked me yesterday, “Mom, what is our next service project?  We’ve done so many, what’s left to do?”  I knew I needed to keep this going.  It was an amazing feeling for him to be so interested in the projects and what we’d do next.  It was also a great opportunity to tell him that there was so much more good we could do in this world…